Some of you in the crypto world are having a fit. Dumping your portfolios getting rid of Bitcoin and your precious Altcoins in fear of what’s happening to the crypto currency market. If we all just pause and actually take a look at the market. You will see all to well that you might just be over reacting. In the last year Bitcoin has been on the up and up. With gains some thought not possible in the world of Cryptocurrency.

Bitcoin has a 261.459% increase to date. Bitcoin has seen a amazing growth since its birth. Yes in the last 3 months we have seen Bitcoin hit just shy of 3000 dollars per Toshi. But Bitcoin has balanced out what some thought to be a bubble turned out to be nothing less than a bump in the road. At 2300 today, you see a 700$ loss, I see a 1500$ increase in the span of 6 short months and in the span of 3 months a 1100$ increase. Check out the graphs below. 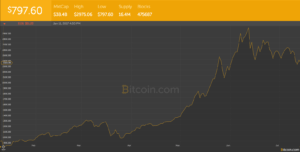 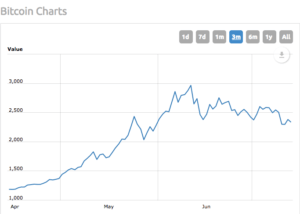 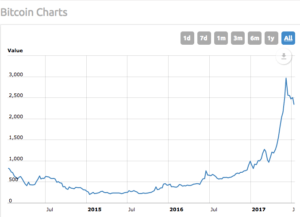 Those numbers are incredibly high considering all of the fear selling. For the average person doubling or even tripling your investment in less than a year is impossible .

Whatever it is that you would like to call it, Bitcoin still has a ton of potential and growing to do. So before ye of little faith doubt the crypto market. Check the charts , take a step back from the masses and see what I see.

Posted by: Jaheyla Jones
View more posts
Tags:bitcoin, Bitcoin dropping, Crypto, cryptocurrency, toshi talk, why is bitcoin failing
You say Bitcoin is failing we say Bitcoin is winning
5 out of 5 based on 1 user ratings