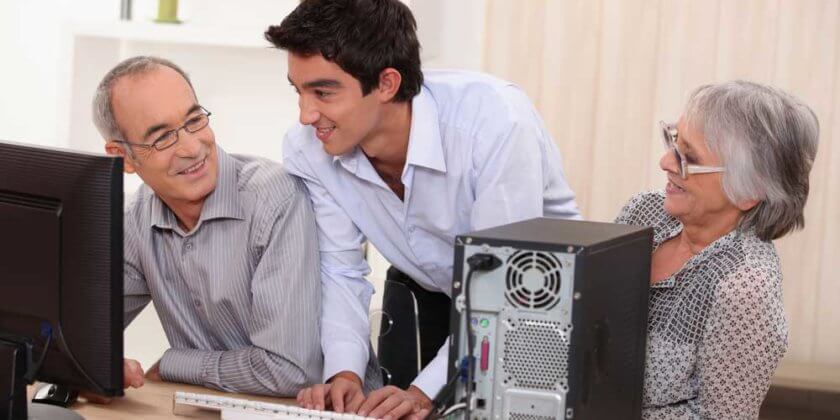 Grandma. You set up her email addresses for her. You groaned when she signed up for Facebook, cartoonishly tore out tufts of your own hair as you tried to explain the security settings, and, if you live in Colorado, were gentle but firm when it came to the intricacies of the perfect bong hit. But now comes the real challenge: you’ve got to help Grandma understand blockchain technology and what it can do.

Well, not yet you don’t, maybe. The mass adoption of this innovation isn’t here just yet, but the signs all seem to point to its inevitability, and the people smart enough to believe the signs are pointing themselves that way too. But if you’ve been keeping an eye on the emergence of ICOs, discussions of transaction fees, or the need for a Smart Contract Dispute Resolution, you may well be dreading the day you’ll have to actually explain even a small amount of this to a parent, let alone a grandparent. Does she even know what PayPal is?

First, take heart: there won’t be any mass adoption if everyone needs to know every single technical detail. Our beloved elders need our help configuring their Wi-Fi, not the story of how Hedy Lamarr invented it. But as this particular innovation continues to rear its disruptive head in more areas of our everyday world, from preschools to remittance companies, it gets easier to envision a time when Grandma might require some rudimentary understanding of exactly what it is that’s so special about this digital money. And like many people still scratching their heads about cryptocurrency, she could well be very attached to the idea that money has something to do with a bank.

So start off with the Bank of Canada. Or, at least, the Bank of Canada Museum, which recently announced the installation of a Yap stone in the lobby. Also known as a rai, the giant stone coin reportedly weighs enough to be delivered on a crane. The Yap, indigenous to the sunny Federated States of Micronesia, once used these enormous stones as currency.

But how would they do that? If your grandmother’s knowledge of tribal cultures is like mine and comes from UFO documentaries, she might imagine they used some mysterious alien technology to move them from dwelling to dwelling. But there was a much easier way: they just let everybody around know whose stone it was whenever there was a transaction. There weren’t so many Yap at the time, one presumes, to need a centralized source that kept track of whose stone was whose. Or rather, the Yap themselves functioned as a ledger of ownership.  And so the giant stones, plus the information in the heads of the small surrounding community operated as a publically distributed ledger.

Next, ask her to imagine for a moment that the Yap has grown to a global diaspora: how are they keeping everyone up to date on whose stone is whose? On their phones? Without a bank? Cryptocurrency manages to maintain and update the community consensus. That is, the blockchain does the which-stone-is-whose part without any middleman.

Grandma takes this in and visibly registers at least the bit about the middleman. But she’s never suffered your foolishness gladly. “OK, smarty-pants,” she asks, “if I go into my Bitcoin account–”

“You have a Bitcoin address, but OK, you’d look at your ‘wallet’…”

“How is this any different than PayPal?”

“It’s, ok, say, their computer network is like a church and this one is more like a tent city…right? Um… in that, there’s no middleman. Again.” Is the lack of an intermediary difficult for her? Well, why shouldn’t it be?

But she’s sharper than you think: “So if your blockchain is like one big no-middleman Yap coin, and everyone has access to it, how do I know it’s not being tampered with?”

You perk up and take a crack at explaining mining: “So, imagine I’m twisting metal into a loop — that I hope to add to a chain. But I’m competing to be the first to twist the metal into this exact unguessable weird shape it needs to be, in order to be verified by everyone around me as chain worthy. I win, I get paid, I add it to the chain. And then this goes on all day and night for years. Except with deliberately pointless math instead of metal.”

She studies you. “So my question was, But, computers… and your answer is, Yes, but, math.”

“Right. This Satoshi Nakamoto fellow solved a mathematical problem. Before people could use this math, your fears were more reasonable. And while it’s true that people have stolen huge amounts of cryptocurrency –“

Now you’ve done it. She leans back, satisfied that this crypto nonsense has finally lost her, and clearly ready to abandon ever needing to know anymore, from you or anyone else.

“But these thefts have not led to people abandoning them, Grandma. It’s making them more resilient.”

But maybe this is a bridge too far. Perhaps the generation gap is real this time, and elderly folks who can talk about cryptocurrency is only a joke for future soft drink ads.

Remembering her cable news addiction, perhaps you’ll make a political appeal. “Look, right now with Segregated Witness…Um, there’s this debate about how to move forward, technically, and folks get to vote with their computing power. And in this environment, if folks were to consolidate their power and behave tyrannically, other folks notice quickly.” (Remember, even political micro-speeches require multiple references to folks.)

Or maybe you’ll scare her: “When The Shit Goes Down, Grandma, the Young Adult dystopias your grandchildren read will be all too real, smart contracts will be the only way to enforce payments, and all Thunderdome results will be run through a secure Oracle!”

But such confrontational fear-mongering is rarely persuasive. Should you steer her back to banks, the staid, reassuring institution of her youth (presuming she didn’t live through the Depression, slept through the crash of 2008, and didn’t hear about the Flash Crash of 2010)? Don’t worry, even though this innovation in currency doesn’t seem to much need banks, they’re hard at work making sure they’ll still exist, already testing their own blockchain uses and coins. Might they unobtrusively adapt to the new environment, bringing Grandma into this brave new world without any of your earth-shattering rhetoric?

Grandma’s playing with her iPhone while you muddle this over. A grandchild has launched a crowdfunding campaign, and naturally, she wants to help the aspiring documentarian.

“Oh look, she’s doing it too,” she notes.”I can get tokens for donating.”

Well sure, crypto tech startups use token sales to incentivize participation, so why not a filmmaker?

Maybe we all have to start running to keep up.

Posted by: Ernan Flynn
View more posts
Tags:crypto talk, grandma bitcoin, how to explain crypto, talk crypto
How To Explain Crypto Currency To Your Grandparents
5 out of 5 based on 2 user ratings